Skip to content
Summary of the Chancellors Spring Statement 2022 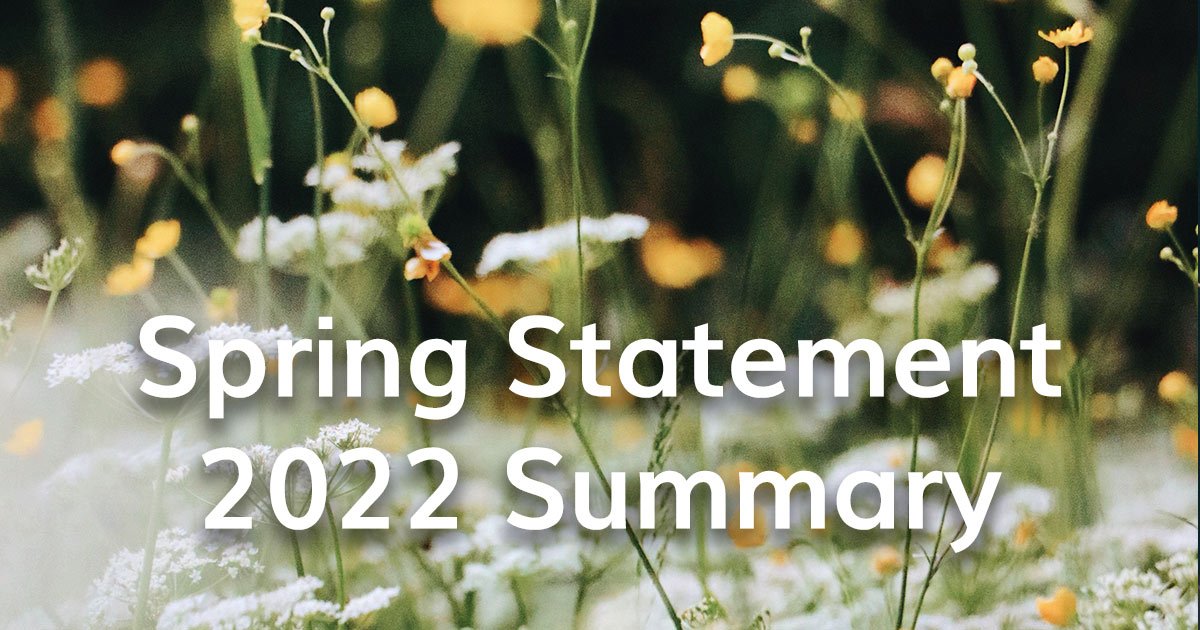 Caught between a rock and a hard place the Chancellor, Rishi Sunak, presented his Spring Statement which updated parliament on the current state of the economy as published by the Office for Budgetary Responsibility (OBS).

It also included a number of tax and NIC changes.

Ordinarily, the OBS report would be the sole focus of his report, but international events have conspired to force his hand to support beleaguered families in the UK as they struggle with the unprecedented rise in energy, motoring and other costs.

This summary sets the more significant changes he announced.

With inflation due to rise above 8% this year there is every likelihood that disposable income (purchasing power) will drop. This will place severe financial burdens on those at the bottom end of the income scale, particularly benefit claimants and pensioners.

There have been larger than expected tax revenues this year which gives the Chancellor some elbow room to assist with rising household costs and without having to resort to additional government borrowing. The remainder of this summary sets out the main support initiatives announced.

The 1.25 percentage points increase to fund health and social care will still apply from April 2022.

However, from 6 July 2022, the threshold at which employees start to pay National Insurance is to be increased from £190 a week to £242 a week. This means that earnings up to £12,570 – in a full tax year – will suffer no income tax or Class 1 National Insurance deductions. Payroll operators will no doubt be receiving confirmation from their payroll software suppliers when the appropriate changes have been made to accommodate these July changes. This change will be welcomed by those on low incomes and is a sensible harmonisation of thresholds for income tax and National Insurance.

To help households with the cost of essentials such as food, clothing and utilities, the government is providing an additional £500 million for the Household Support Fund from April, on top of the £500 million already provided since October 2021, bringing total funding to £1 billion. In England, Local Authorities are best placed to help those in their areas who need it most and will receive an additional £421 million, whilst the devolved administrations will receive an additional £79 million in funding through the Barnett formula.
Individuals in need of support should enquire at their local authority to see if they qualify for benefits under this measure.

This change will apply from 1 April 2022 to 31 March 2027 and will ensure that a family installing roof-top solar panels could save £1,000 VAT on the installation and then annual savings on their energy bills.

The Northern Ireland Executive will receive a Barnett share of the value of this relief until it can be introduced UK-wide.

During the Autumn Budget 2021 the government announced the introduction of targeted business rate exemptions from 1 April 2023 until 31 March 2035 for eligible plant and machinery used in onsite renewable energy generation and storage, and a 100% relief for eligible low-carbon heat networks with their own rates bill, to support the decarbonisation of non-domestic buildings. The government is bringing forward the implementation of these measures and is announcing that they will now take effect from April 2022.

As expected, the duty on petrol and diesel will be reduced by 5p per litre from 6pm, 23 March 2022. This is a UK-wide reduction in costs for hard-pressed motorists. The cut is temporary. It will apply for 12-months.

Future changes to the tax system

One of the Chancellor’s more popular announcements was his intention to reduce the basic rate of income tax from 20% to 19%. However, this will not be considered until April 2024 and only if the government finances allow. As income tax rates in Scotland are set by the Scottish government, this reduction may or may not apply.

The Chancellor also promised to consider future changes, from April 2023, to tax reliefs that promote R&D, business investment and the raising of capital. Accordingly, before the Autumn Budget 2022, the Treasury will be consulting on possible changes to the relevant allowances and reliefs.

If you need more information regarding any of the issues raised in this summary, please call.